As many of you know, we will begin our transition back from the Dominican Republic next month. It is crazy to think that it has already been 2 years. What a wild, fun, exciting, difficult and sometimes scary ride. Thank you for coming on mission with us and for supporting the children here in Rio San Juan.

Our journey here began with a car accident involving a moped, a surfboard, broken windows, and me (Ryan) going to jail. We brought to that experience everything a new missionary, fresh from the US would bring to something like that. We were frustrated with senseless system, a slow process, and also angry, hurt and overwhelmed. We tried to fight the Dominican process every step of the way and ended up tired and extorted for several hundred dollars in the end.

Fast forward to our journey the other day:

We were driving our car (which hasn’t had any problems aside from the above accident) to a town about 1 ½ hours away. We saw some flashing lights on the dashboard and stopped to check what the problem might be. A little low on oil – no problem. We pulled in to a local gas station, topped off with oil and grabbed some oil for the road. About 10 minutes later the same lights began to flash again – followed promptly by our car dying in the middle of the highway. We pulled off to the side the best we could, but there wasn’t much of a shoulder. As we were changing seats so Ryan could push the car to a clear spot, 2 Dominican men showed up and helped us push the car. The clear area was the front yard of a Dominican man named Jerry.

Jerry ran off to fetch oil (and told us to wait inside his home) while we did all the standard things you do when stranded on the side of the highway. I checked the oil a few times while the boys fed and chased the chickens in Gerry’s yard. We chatted with random Dominicans passing by, admired the view and fruit trees, commented about how “nice” Jerry’s house is, and just wait. Upon Jerry’s return we realized there was something much more significant wrong with our vehicle. So – Jerry ran off to get the local mechanic {Did I mention we were about ½ hour between towns}. So we waited some more. And waited… and waited….

Jerry’s friend Ingles showed up and started trouble shooting. Apparently lights flashing on our previously pristine Dominican vehicle now means our engine has decided to seize completely and we are going to need a tow. No – not tow truck towed – we were pulled by a rope attached to Ingles’ Celica. Jerry followed on his moto and told folks to get out of the way.

The story is still being played out as our vehicle is still stuck in a village an hour away, but the change in our attitudes has been noticeable. This time we were satisfied to sit in front of Jerry’s house for several hours in the June heat just waiting and talking. We were comfortable being towed through the worst driving conditions imaginable by a Toyota Celica (same one Sandy had in 1991 btw;). We were ecstatic to find out the local gas station has plastic chairs and a treacherous jungle gym, which our boys enjoyed. Some Dominicans fetched water for our dogs (did I mention of course our dogs were with us too). We were content to sit and wait while our friends (and fellow missionaries) rescued our stranded family.

The moral of our story is not car problems. It is that Dominicans have taught us that our American pace of life was just WAY TOO FAST. And also, that waiting is okay, even great, because it’s a great time to focus on relationships and connect with people. Instead of focusing on what task isn’t being done in the waiting process, we have learned to focus on what important things can be done.

Your lives have continued while we have been away and many of you will expect us to return as you remember us. However, this experience has changed us significantly for the rest of our lives. We are going to return different than we were. We are going to return pretty tired, quite a bit tanner, but also changed in ways we have not yet begun to realize. Thank you for your support, your prayers, and most of all for your understanding. 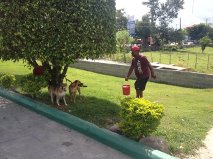 Dominican guy caring for the hounds in the heat

If you would like to support us through our transition, please click  “Giving” above. We will soon begin the long process of merging our two lives.

Oops, you forgot something.

The words you entered did not match the given text. Please try again.

Reply SusanDioge
6:36 PM on September 23, 2017
Hello friends!
I am an official representative of private company which deals with all kinds of written work (essay, coursework, dissertation, presentation, report, etc) in short time.
We are ready to offer a free accomplishment of written work hoping for further cooperation and honest feedback about our service.
This offer has limited quantities!!!
Details on our website:
https://top-essay.biz

Reply Josephlom
2:46 AM on May 8, 2019
how drugs affect the nervous system http://adderall.cmonfofo.com/ public health management corporation

Reply CharlesHix
10:45 PM on May 20, 2019
is there a abortion pill zolpidem.aforum.fr watch doctor who free online season 7